Based on a feel-good true story, “Calendar Girls” is adapted by Tim Firth from his original screenplay, for Nigel Cole’s 2003 British film, by the same name.  The play focuses on six women and their resolve to make a difference in the world, with meaningful contribution.  Members in a women’s club, these six women, Chris (Anne Younan), Annie (Deb Anderson), Cora (Caitlin L. Papp), Jessie (Ruth E. Stein), Celia (Karen DeHart), Ruth (Mary Lou Torre) often spar with the club queen bee Marie (Patricia Tyler) about how their club could be a more meaningful group.  Opportunity presents itself when Annie’s husband, John (Ken Boswell) passes away and in memory of John, the women decide to raise funds for a new couch in the waiting room of the local hospital.

They imagined that ordinary, run of the mill calendars with flowers and landmarks would not sell easily.  Chris and Annie came up with a unique idea (something they had jokingly discussed earlier in John’s presence). They decided to do a calendar with pictures of their group of mature women doing traditional Women’s Institute activities like knitting and baking, with a little twist. The women would pose in nude as they do these activities, with discreetly placed props to cover specific body parts with little exposure but more of a titillating suggestion. 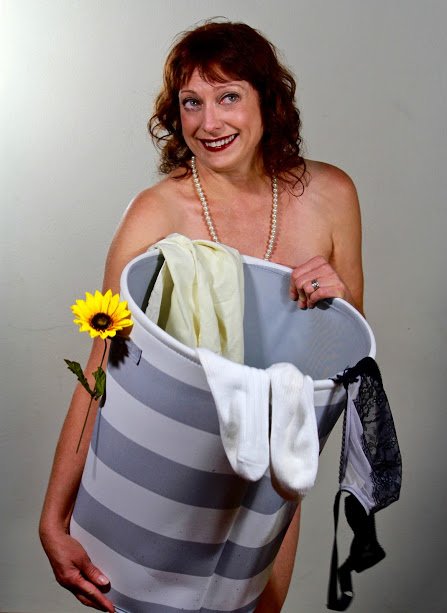 The women were not prepared for the notoriety and eventually international fame the calendar brought them. It took a toll on their friendships and personal lives. Sometimes they lashed out at each other and at other times in their frustration they lost sight of the fact that they had far exceeded their set goal.  While they had imagined raising a few hundred pounds for the couch, they ended up raising nearly 3 million pounds that enabled building of an entirely new hospital wing.

Eventually, these classy women found their footing and solace in their friendship. They recognized that “out of John’s tragic death came something very special; and acknowledged that “everything we do is born out of love for him”. Clearly their little act stood as a symbol of something much bigger than they had imagined. It was sexiness combined with spunk, mixed with a dose of sass that set them free and enabled them to create a work of art, in favor of a worthy cause, and the world took notice and found inspiration.

While the story is played on world stage, Director, Jeffrey Bracco, Scenic Designer, Ron Gasparinetti and Stage Manager, Kimberly Scofield did a fabulous job in bringing the world to the women, on stage. Calendar Girls will be playing at City Lights Theater in San Jose, CA till December 18, 2016 and tickets are available at www.cltc.org .