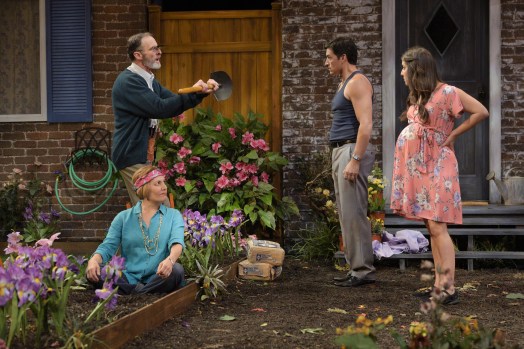 “How can we make user experience like flushing a toilet”, rhetorically questions Silicon Valley startup CEO, Mike Jordan (Barnaby Falls), in Anush Moorthy’s play “Unicorns”, a satire on modern era startups. It’s a perfect script to be presented without the elaborate set, costumes, or lights, to a small, intimate gathering of Silicon Valley audience. The play was performed on second stage at Mountain View Center for Performing Arts, by NAATAK company which has won for three years in a row in 2015, 2016, and 2017, the San Jose Mercury News Reader’s Choice Award, for “Best Live Theatre in Silicon Valley”.

Unicorns traces an engineer’s journey as he joins Oberherr, a high valuation startup. Paranoid Silicon Valley culture has made it imperative for Oberherr, to be extremely secretive regarding their products and offerings. In the absence of talking about their products, in order to get noticed before the big launch and the IPO, the company banks on heavy use of buzzwords. Mike often says, “at Oberherr, we imaginate, innovate, ideate”. Dressed in the style made fashionable among high achievers by  Apple’s former boss, Steve Jobs, in black turtleneck and blue jeans, Mike insists, their engineers “create things from nothingness”.

The company has eliminated desks to enable free flow of thinking and interaction and employees are forbidden to talk about the company, outside its premises. And then there is a palpable omnipresence of the board (Havish Ravipati) keeping a tight focus on the impending IPO. All this paranoia and cutthroat mentality has created interesting dynamics at Oberherr. While Radhika (Tannistha Mukherjee) is highly territorial and least helpful to newbies, her accomplishments go unnoticed in supposedly “egalitarian” workplace, dominated by men.  Ramanathan (Natraj Kumar) has learned to get noticed by sucking up to Mike, and Robin (Rohit Mukherjee) stays out of trouble by staying focused on his laptop. Sahil (Varghese Muthalaly) is fabulous in his role as a new engineer joining Oberherr whose fortune rises and tumbles at the blink of an eye. Sahil shares a healthy camaraderie with a fellow software engineer, Joyce (Aparna Warrier) but couldn’t explain even to his wife Priya (Preeti Bhat) about company’s products.

As seen from a few recent debacles, (one of the prominent one being Theranos) there are interesting shortcomings in the hyped up Silicon Valley startup culture.  The focus on speed and short term gains, at the expense of long term vision and value-add of its offerings is often proportionately correlated with diminishing concern for people, true teamwork and quality of life. People become pawns in a system when stretching the truth isn’t just overlooked but sometimes admired, in quest for world domination and mad rush to IPOs.  Unicorns by NAATAK is a fantastic spoof on the Silicon Valley startup culture. This is a not-to-miss play of this theater season in the bay area. Tickets may be available at www.naatak.com .