The Siegel by Michael Mitnick, directed by Mark Anderson Phillips is a beautiful romantic comedy, with the title poking fun at the Chechov classic, “The Seagull”.  Ehan Siegal (Ben Euphrat) is in love with Alice (Ella Dershowitz) and though Alice and Ethan have broken up about two years ago, as the play opens, Ethan is with Alice’s parents, Ron (Erik Gandolfi) and Deborah (Luisa Sermol) asking them for Alice’s hand in marriage.

Ethan is on a mission to convince everyone who would be willing to get a dinner or down a few drinks that he deserves a second chance. Ethan tries to convince Alice’s mystified parents. “The point is, I will love you daughter as if she were my daughter”, says the aspiring groom. When Ron and Deborah remain unconvinced, Ethan manages to persuade Ron to have a beer with him where he reads the poem he has written for Alice.

Alice herself is not only determinedly against the entire idea but to complicate matters, she has recently moved in with her boyfriend, Nelson (David Morales). Ethan forces himself on their dinner date and Nelson is somewhat intrigued and amused by Alice’s ex boyfriend. But when Ethan manages to convince Alice to go on a dinner date, Nelson is no longer amused and he too shows up at her parents’ home to ask her hand in marriage. This prompts Alice’s bemused father to inquire, “well how many goats do you offer”? 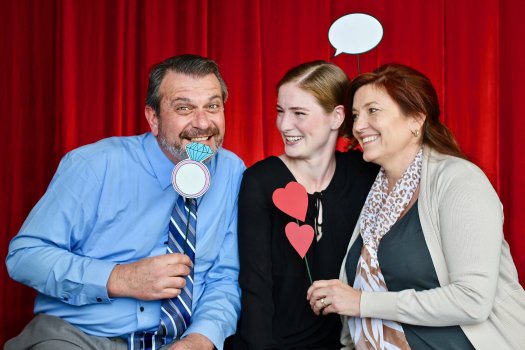 If the goal is for Alice to be with the person who is a better match for her, then an equally pertinent question lingers in the air, “Do you think there is only one person out there for us”? For Alice, is that person Ethan or Nelson? This isn’t a play with a remarkable story. But it is a play with the most memorable, best cast of characters and each of them do do complete justice to their roles. Each one is just perfect or with just the right mix of quirkyness. “A cast is kind of a living, breathing organism”, says director Phillips and the result is this superbly funny play that leaves you in splits of laughter.

It would be amiss to not notice an underlying sadness, a gentle touch of melancholy underneath all the drama.  Without dwelling on it too much, it leaves the audience with a whole host of nagging questions. “Do we settle sometimes in life, because it is the right thing to do in that moment or because it takes too much courage to change course, and how long a shadow will that cast on one’s future happiness?” A memorable gem is a quote from Alice’s mother to Alice, “the person who you enjoy being with, is the person you should be with”.  This is not-to-miss play of this theater season and is running at Citylights Theater in San Jose. For tickets, go to www.cltc.org .

This play is set in Montgomery, Alabama, a place that has so much historical significance, both as the Cradle of the Confederacy and the Cradle of Civil Rights. “Alabama Story” is a powerful play by Kenneth Jones and is inspired by real events in “the Deep South of the imagination”.

The incident springs from an innocent children’s story book published in 1958 (one may say it hides an apparent message promoting diversity).  Author and illustrator Garth Williams (best known for his illustrations in Charlotte’s Web and Little House On the Prairie) released a book called The Rabbits’ Wedding, where a black rabbit marries a white rabbit. This gentle children’s book created a massive stir and ignited the passions of a State Senator who harbored strong segregationist agenda. Senator Higgins (Erik Gandolfi) issued a request for the book to be pulled out of state’s library shelves on the charge that it promoted “race-mixing”.

The story would end there, if it was not for a no-nonsense State Librarian, Emily Reed (Karen DeHart). She counters him saying that the book is an important vehicle for educating the impressionable youth and young minds must get all the information available so they can make their own decisions about people and circumstances. She in fact, ordered the book to be pulled out of shelves and out of general circulation and instead put it in reserve circulation so that it would always remain available.

This public feud unfolds against the backdrop of intimate story of childhood friends, Joshua (Bezachin Jifar), son of a house slave woman and Lily Whitfield (Maria Giere Marquis), daughter of a slave owner.

This is a simple yet powerful play that makes a bold statement about how a character may be tested at critical times and those who can withstand the test of character are the powerful figures that reshape the community; reshape a nation. Reed faced tremendous political pressure from the state politicians and at one time she said, “We have had difficulty with the book…. But we have not lost our integrity”. Mixed in with the politically charged focus of the play, there is some courtroom drama, childhood love, hint of passion, and a glimpse into how history may have unfolded in so many different ways, big and small, in private and intimate recesses of one’s mind and in public arena, during one of the most significant periods in America.  Superb direction is by Lisa Mallette, who is in her 17th season at City Lights.

I declare, this is a not-to-miss play of this theater season and will be running at City Lights Theater in San Jose, until February 18, 2018. For tickets, check the website www.cltc.org .