You must think of the company you keep #Election 2016

After all the arguments are done, and when I have asked if none of the things that Trump has said or done bothers them enough to not give their vote to Trump in #Election2016, then I have heard from some people still planning to vote for Donald Trump that they feel all right because nearly 50% of the country feels that way too.  Aside from the fact that it is the lamest argument in a democracy where the responsibility falls individually on each one of us, and historically people have given away their lives and livelihood for the privilege to vote and not be led through a herd mentality, even then, you must also think about which 50% you want to be with.

Atlantic Monthly a relatively new anti-slavery magazine, three years after it was found in 1860, endorsed Lincoln, a Republican, for President, and then after 104 years, in 1964, they made another endorsement for LBJ for President (out of horror of the opponent Barry Goldwater and his cavalier attitude towards nuclear weapons and civil rights). For the third time in its history, the magazine endorsed Hillary Clinton and unendorsed Trump.

USA Today has never taken a position on a presidential election in its 34 year history as a newspaper that you often get at your door in most hotel chains. In its first ever endorsement, it urged readers to vote for any candidate not named Donald Trump. Since its start in 1890, Arizona Republic has only endorsed Republican party candidates and never ever endorsed a Democrat over a Republican for president. Saying that “this year is different”, for the first time, it endorsed Hillary Clinton, over Trump.

You have heard it all.  From media outlets to newspaper publications to journalists to business leaders to billionaires, to political leaders (including eminent Republicans) have given their endorsements to Hillary Clinton.  As far as I know, only Ted Cruz, one Silicon Valley business leader, and one apparently little known magazine has endorsed Trump. 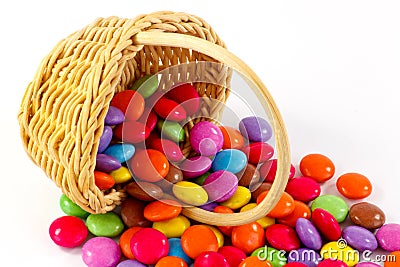 Yes Hillary Clinton’s word choice was very poor in calling some of Trump supporters as “basket of deplorables” but really — think about it…………… ALL of Trump’s words and actions have hovered on utterly trashy and deplorable.  Now do you want to stand with him and his basket of deplorable behaviors, simply because nearly 50% will do it?  Just imagine this basket filled with skittles where each candy stands for Trump’s “deplorable” behavior like sexism, lewdness, sexual harassment, racism, mocking physical disability, fat & age shaming women, insulting gold star veteran family, and the basket is now overflowing.

If it was any other Republican candidate, then I would fight vehemently against them but also BUT I would understand why you’d want that person as your first choice.  I would understand that we differ in values.  While I would fight to uphold my values, I would also understand that you are fighting to uphold your values. But you must ask, does Trump reflect your values; your character as a person? He has never stood firm on any issue, so which of your values he reflects? For instance, if you care for immigration reform then do you seriously believe that a man who has flip flopped his entire way through the campaign and advanced the most bogus, impractical, unenforceble solution of an expensive, physical wall, reflects what you stand for? If you believe in law and order then what specific solution he has proposed and stuck with it, besides rhetoric? If you believe in his toughness and his leadership in the world then what strategy proves his skill other than him saying “he’ll take a walk from negotiation” and praising thugs like Putin?

I am going to turn around his rhetoric of “what do you have to lose” and ask you, what do you have to lose in NOT VOTING FOR TRUMP? You are afraid Hillary will appoint liberal judges? Well then what? If you are against LGBT and afraid that they will get a right to marry then I understand your fear. But wouldn’t a small part of you say, well how bad would it be? In any case, the nation is moving towards that and after Barbara and Jenny moved in next door, you’ve realized that they are great neighbors and what they do in their bedroom does not affect you in any way?

What have you got to lose in not voting for Trump? Even someone Trump had mentioned and might have nominated for Supreme Court judgeship, has now requested Donald Trump to step down. I am trying to say that I understand your fear because I would fear that my values will not be upheld with a conservative leadership. But shouldn’t it be more important to us all that a leader is wise and mature, cares for the country, behaves with some minimum decorum and propriety and has some experience in leading the nation?

If you would not leave your young daughter in a room alone with #DonaldTrump, is he the man you’d want to lead our country? If you are a woman or respect women then do you want a man to lead us who has called us worst imaginable names, fat shamed us, age shamed us, engaged in sexual harassment using his position as a lever, claimed to have sexually overpowered (assault) women (just because he can), and objectified us by referring to us as our genitals with words like c*&^ and p&%$^. Haven’t each of us women experienced at least some of that in real life and want our leader to move us forward, not backward in time? If your brother, sister or friend struggles on a daily basis with physical challenges, do you want a man who mocks handicapped people to lead our nation? We all owe a deep debt of gratitude to our veterans and do you want to send our sons and daughters to war, under the leadership of a man who has ridiculed a gold star family, flip flopped on his being pro and anti war?

In fact, even if you are vehemently against illegal immigration and are ignoring all deportations done by Obama administration, EVEN THEN, I AM SURE YOU ARE NOT A RACIST, because I refuse to believe there are 50% racists in this greatest and most diverse nation in the world. Would you want a man to lead our country who has branded an entire group (with the exception of some), with a broad brush and called them murderers and rapists?  In your heart do you believe that even all illegal immigrants are murderers and rapists? You know it is wrong and you know that someone who stereotypes so many groups of people in most “deplorable” terms, will do that some day to you, to your group, to the group that you love or belong to.

I ask you millennials: you may be somewhat unfazed by what he dubs are his “locker room banter” comments; you are young and you may have heard it all; but think again. It is as if your grand father talks like that and speaks of grabbing your girlfriend. And you must know, Donald Trump doesn’t care for your future. One wonders if he even cares for his own children, discussing his own daughter’s breasts and ass in a public forum. Donald Trump is no Bernie Sanders. Imagine your parent discussing your body in a public forum. Think of how many of you could have gone to college without raking up loans, if he paid nearly a billion dollars of his share of taxes. Girl friends, if his latest, most demeaning comments on women bother you then as woman to woman, I implore you to not give this man your vote.

Don’t fact check, don’t listen to what you hear from the media that you don’t trust. But at least listen to Donald Trump’s own words and let your conscience guide you in doing the right thing. Pay close attention and listen to him speak in the debate. All of you are bothered, very much concerned, annoyed and have agonized about all he has said and more. I am reaching out and asking you, “what do you have to lose” if you don’t give your vote to Trump? Let the chips fall where they may.  Put a small crack in that number – “nearly 50% of the country voting for him” and it will crumble faster than you can blink an eye.

This entry was posted on October 9, 2016, 10:54 am and is filed under Musings. You can follow any responses to this entry through RSS 2.0. You can leave a response, or trackback from your own site.